Thirteen years ago, a company was born in Silicon Valley named Tesla. ”Electric cars could be better in every way than the traditional fuel-powered cars” with this single goal; the company has started to manufacture electric cars. Now, Tesla has become a household name by Elon Musk’s lead in the automotive industry. They are called as leaders when it comes to manufacturing electric cars.

At first, they try to create a large consumer who is interested in trying out new technology. Tesla didn’t let customers down by their cars. But Tesla isn’t the first who made electric cars and the driverless car. But, using big data, Tesla is known as the best in doing that. I came across its work in the field of AI, and so thought of talking about the working technique of Tesla, how it uses Artificial Intelligence for its operation. 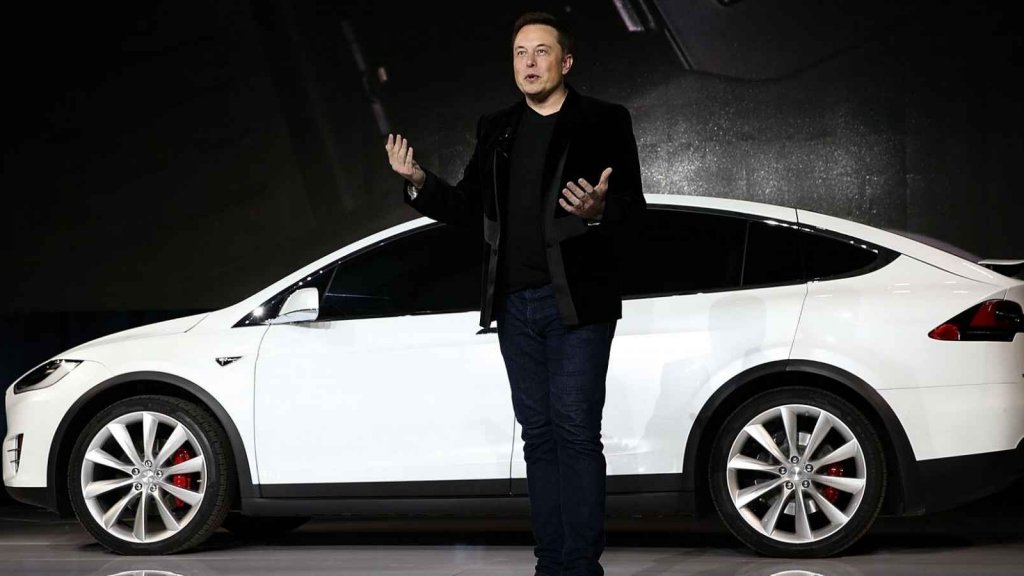 According to their policy, Tesla collects all analytic Tesla data from their car owners. The collected data is directly sent to the cloud for analyzing algorithms and upgrade the software. Tesla’s data collections help Tesla to modify its system and grow in every aspect. It will make Tesla one of the most robust car manufacturing contenders in the industry.

How does Tesla provide Over the Air (OTA) service using AI?

With the new sedan model, Tesla offered the “Tech package” to its customers in October 2014 of 4250 dollars. Including with cameras and sensors, this package help drivers from accidents by warning them. Also, using those sensors, Tesla gathers data from the drivers. After gathering data throughout a year, each of Tesla’s sedan owners received an Over the Air (OTA) update in October 2015 that helps the car to drive itself. Even the drivers didn’t know about the autopilot function that was included in their cars after an update.

In 2014, Tesla provided an OTA solution to reduce power fluctuation for overheating problems to their 30000 owners. Responding to issues make Tesla a unique company who stated very confidently that they are trying their best in software as much as in hardware. Tesla’s data-centre-driven car help to track and monitor the car from their data centre. When the owner of the car implements new software that is also monitored by their data centre, if any problem arises, they get the opportunity to fix any issues remotely.

How does Tesla use Big Data?

In general, Tesla Autonomous Vehicle Technology does the given things:

How does Tesla use Artificial Intelligence?

There is a question on everybody’s mouth that, “Does tesla use AI?”

First of all, the foundation of Tesla Inc Company has been built on two key pillars. One is all-electric propulsion, and the second one is autonomous driving. The California based company has given dual-motor in their highest specification Model SP100D to send the power around 595 HP. And, the immediate torque hit from zero to 100 km/hr to all the four wheels in a staggering 3 seconds. 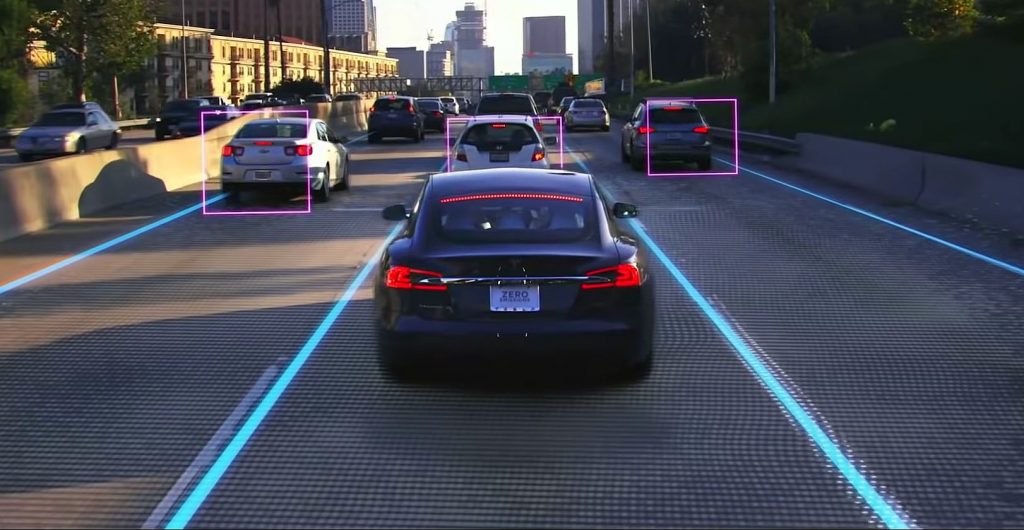 Even with the time company would bring premium manufacturers to acclimate the software into their vehicles for capturing the imagination more. This change might be the incentive by acquiring the data from the Tesla Auto-pilot 2.6 to show viewers that when Artificial Intelligence would take in action, what the car can.

Now, look at the essential caveat – the self-driving software in a Tesla Model 3, S, or X. The electric automotive buff attempt at all 318 tries on the sinuous 17.5 km stretch to reveal the capabilities of Autopilot 2.5 by taking the help of North Carolina and Tennessee. According to the concept, oncoming traffic can be identified with the help of AI – showing us the reaction of software. With the ‘Summon’ upgrade, the vehicle can follow the rules, road signs, and find empty parking spots and park automatically.

Tesla machine learning effectively collects essential data from its vehicles and their drivers. Including the internal and external sensors, it can pick up information such as how a driver operating and place the instruments over the vehicle. Besides this, Tesla keeps on refining its system to hold the data that has tremendous value. The data is also used to generate the high data-dense maps that demonstrate the average increase in traffic speed throughout a road, the location of hazards, and many more to take action for the driver. 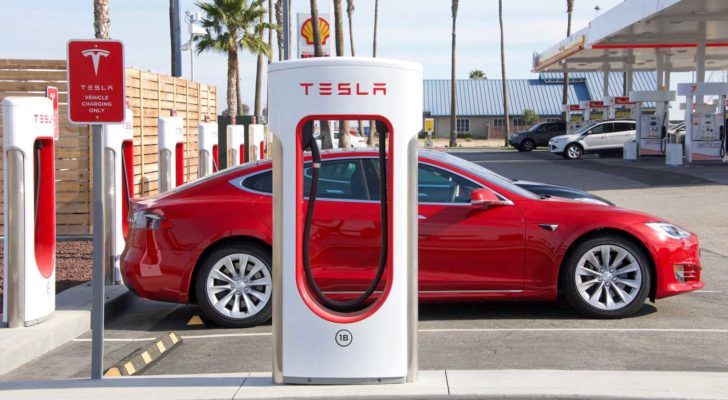 Tesla Machine learning with the cloud is responsible to takes care of educating the entire set, and the third level of decision-making enables to form of networks with other Tesla vehicles nearby to share some of the local insights and information. Shortly, using the networks in their interface along with road-based sensors, traffic cameras, and purge light-up mask, the autonomous cars will be widespread.

All details are based on the new Artificial Intelligence technology which Tesla is creating. Currently, Tesla’s AI is driven by a collaboration with NVIDIA – the hardware manufacturer. It is even larger on the basis of an unsupervised model of machine learning.

With the autopilot software, Tesla has gathered data over 100 million miles. These data are being compiled in the cloud to stimulate road maps for driving the cars automatically. Tesla claims that it is more accurate compared to the standard navigation system by 100 times. In the future, it may sell this data to other car companies, or they may upload all the data to the cloud to help the government in making the safer road.

Tesla announced in January 2020 about their own AI hardware in which they are working on. The amount of data gathered by the company, they believe all their cars will be fully autonomous. By launching a fully autonomous driverless car, Tesla is pushing its competitors to the wall. It also has left the other car companies far behind in the task of data-gathering.

Besides being a firm of data collection and analyzing, Tesla is also known as one of the most aggressive developers in the market. There was no compromisation when it came to developing their chips. Artificial intelligence and Big Data analysis have given access to design autonomous cars for the company with the potential to revolutionize the way.

To optimize AI integrated chips, Tesla had collaborated with NVIDIA. Later, the firm aims to enable the cars to navigate through the freeways, local streets, and traffic signals. In a recent Hot Chips conference, Tesla claims that its performance has been boosted mainly by the massive optimizations of AI chip. With 6billion transistors, it constitutes the processing circuit of their AI chips. The new AI technology of Tesla aims to set a milestone for the automation of cars.

The Tesla system contains dual AI chips to support better road performance. Each of the AI chips performs a separate assessment for guiding the cars in the traffic situation. Then the assessment of both chips is matched by the system. If both the input is the same, then it followed that. For providing a proper safeguard against failure, the car has extra power, besides feeding input data to resume its working if a single unit fails.

These AI chips has optimized the system to run at 2 GHz and perform 36 trillion operations per second. This level of performance is performed by dismissing all generic functions and focusing on the important ones only. Researching over 14 months to design the chip with Samsung, now it is manufacturing the processor. After that, it will be installed in the new Tesla car models. 2020 will be the year for Tesla to release its full self-driving system built on Autopilot that is claimed by Elon Musk. Let’s see how truly the firm sticks.