CHiPK9 is a famous robot toy Dog from WowWee. However, the CHiPK9 robot dog doesn’t look similar to a real dog and is not a living, breathing animal. But we have seen to act like a real dog in different ways. Looking at such a piece of technology, you may be wondered by the acts that robot dogs will perform in your life. 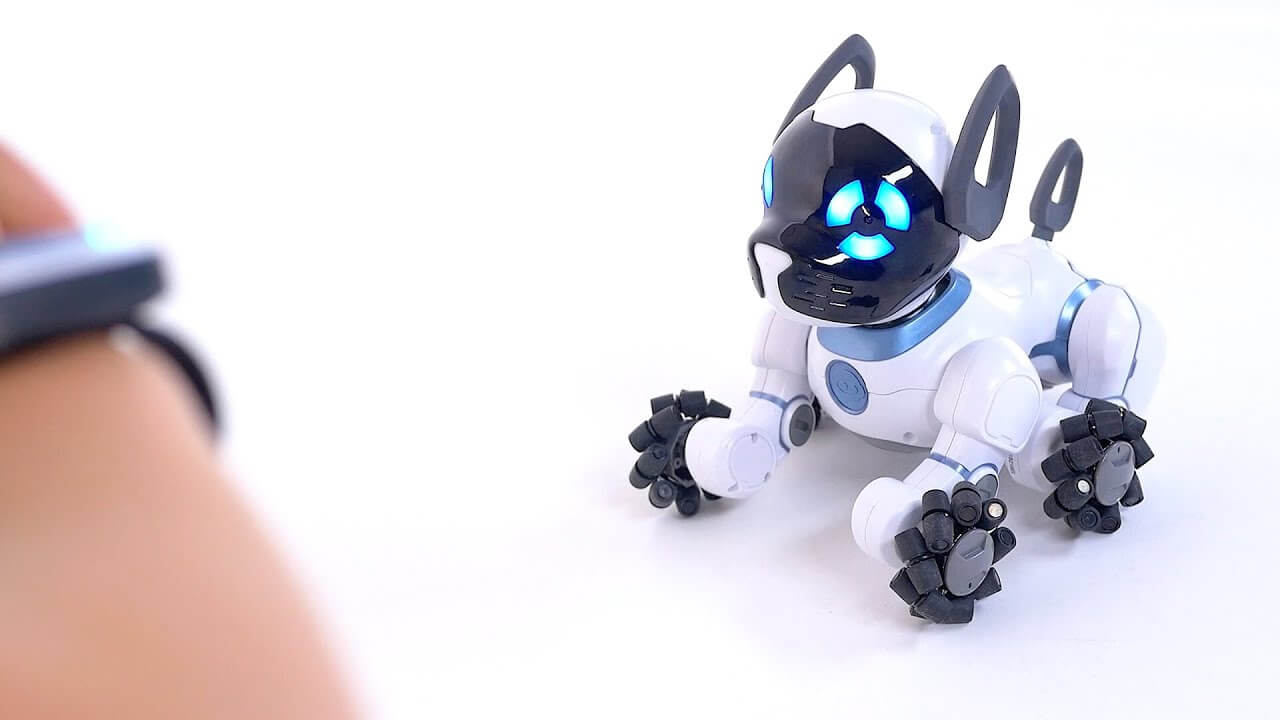 The ChiPK9 Robot Dog is intelligent and affectionate. Along with smart accessories and advanced sensors, CHiPK9 is always ready to play and aware. How you respond uniquely, so your CHiPK9 can recognize you easily.

Artificial Intelligence Algorithms (AIA) enable the adaptive personality of the CHiPK9 robot dog. It follows commands and adapts your hand gestures to shape you uniquely.

Smart band technology enables a unique recognition process for CHiPK9 to recognize you, greet you at the door, follow you, and even bother you during mealtime and playtime.

You can roll the Smart ball and play-fetch together. CHiPK9 robot dog’s sensors allow him to locate the ball, and he quickly chases after it with his four Mecanum wheels and brings it right back to you.

CHiPK9 robot dog needs to rest after all the engaging activities at home. He will automatically go back to his Smart bed for a charge whenever the power gets low.

CHiPK9 robot dog, along with a large round head and puppy-like body, is cute. The ears and tail are made of flexible rubber. CHiPK9 can turn its head from side-to-side, and its legs move back, including fixed knees but forth at the shoulder and hip joints. CHiPK9 robot dogs have more mobility than you think, and it’s because of the Mecanum wheels on its feet. This design helps the robot dog to roll at high speed in any direction. The wheels are excellent on almost every surface and help CHiPK9 to overcome short obstacles. Although CHiPK9 is not an outdoor robot dog. His wheels could be stuck on grass or any other muddy paths. CHiPK9 robot dog comes with a Smart Ball, Smart Band, and Smart Bed (charging base).

What can this CHiPK9 robot dog toy do and can’t do?

Along with some native intelligence and a little bit of personality, the CHiPK9 is always active, and Smart Band is used to recognize you. That’s impressive. While playing with CHiPK9, we almost forgot that it was a bunch of metals, wires, chips, and sensors. CHiPK9 robot dogs come alive multiple times, and you never know what a CHiPK9 robot dog might do similar to a real dog.

CHiPK9 robot dog makes a variety of sounds like dogs while playing with it. It can bark, chirps happily and even cries. When CHiPK9 is listening but doesn’t make any sounds, you can say “Hey CHiPK9” to make him responsive. As you told it, the eyes of CHiPK9 turn green, and it’s ready for taking command. CHiPK9 robot dog can respond to various types of voice commands such as “Fetch,” “Come Here,” “Sit Down” (not “Sit” only), “Let’s Dance,” “Do Yoga,” “Good Dog,” and “Love You.” CHiPK9 can hear you consistently while you are speaking at an average level without background noise. The responses are quite sharp.

CHiPK9 is a living robot dog, embedded with a handful of touch and motion sensors. The touch sensors are on the head of CHiPK9. When you touch its nose, the robot dog barks with happy pants. The motion sensors help the robot to know when the user has picked it up or pushed it. For different actions, the CHiPK9 robot dog has a variety of responses. For example, if you could kiss it, it would respond to you back by kissing (with an audio kiss).

The Smart Band, a key component of controlling CHiPK9, is a rechargeable, Bluetooth-based wristband used to communicate with that robot dog. There is a button in the centre written “CHiPK9”, the word on it. Pressing the button helps you to get the robot dog’s attention, or it can stop the dog from doing current work. You can use the top placed button to make CHiPK9 follow you around. A fetch button is there to direct him to play with the smart ball, and a thumbs up button for getting positive signal reinforcement.

Although the robot dog can find it’s charging base, you can even force CHiPK9 to go to that base by using this App. During charging mode, the eyes, made up of three curved LED lights, of CHiPK9 turn red. Lining up in front of the charger, CHiPK9 sits down after backup.

Instead of the usual legs like a real dog, CHiPK9 has specially-designed wheels, which helps move on a smooth floor with enough traction. Surprisingly he can move quickly across the floor using wheels and easily turn in any direction. Using wheels keeps things simple in terms of breaking fewer motors and mechanisms instead of complicated mechanical legs.

Besides the ball, a bracelet has also been found in the package. The CHiPK9 robot dog can be connected to the bracelet via Bluetooth. It contains a remote control that helps the user to interact with the robot dog.

There are various reasons behind the improvement of CHiPK9 Robot Dog as long as you play with CHiPK9. First, you have to give a Thumbs Up when you like the task that CHiPK9 does. It helps CHiPK9 to learn what you like and will adapt so that it can change itself to become a better pet dog for you.

Second, WowWee is adding new features consistently and pushing it up to an upgraded firmware. CHiPK9 is surrounded by a lot of technology to be used more effectively. So, if you buy the CHiPK9 robot dog today, then you would get a better version of CHiPK9.

CHiPK9 can be a more intelligent and interactive robot dog in the following ways as compared to others.

You realize that the CHiPK9 is a robot dog while it accidentally smashed into a wall or got caught under the table. Despite having a wide range of motion, CHiPK9 seems to be less aware than other robots to its surroundings. It regularly smashed into walls as well as other obstacles. If a wheel of his got caught behind a chair, he doesn’t figure out how to get out of it.

The primary cons of CHiPK9 are its price and noise level. As a sophisticated robot, the price of CHiPK9 isn’t bad, i.e. under 200 dollars. But it is expensive as a toy. Another problem, its Mecanum wheel motors are too loud. Some people called them “annoying.” But with the loud motors, the CHiPK9 robot dog is speedy at moving and playing fetch.

What’s in the box?

All the interaction and response depends heavily on sensors in the central unit. The smart ball, the bracelet in the arm, and the charging bed – every accessory must be within range to work properly. Sometimes it fails to respond or fetches due to out of range issues.

So, that’s all for today. We make sure you will get to know about the CHiPK9 Robot Dog by this comprehensive information. If you like our content, then share the article with your friends, family members and others. If you want to ask any related questions, comment below, as we are trying to provide better to you.